The UEFA Champions League resumes later tonight and clubs across Europe will be hoping to make a positive start to the group stages.

Here is our team to win five-fold accumulator for Tuesday’s matches.

Sevilla vs Salzburg – Bet on Sevilla to win at 7/10

Both teams have done well in their recent outings but the Spanish outfit are stronger on paper and they will be confident of grinding out a win against the Austrian side at home.

Sevilla have won their last two meetings against Salzburg. Their defensive organisation should help them secure the three points here.

The visitors have conceded in four of their last five matches across all competitions whereas Sevilla have managed to keep a clean sheet in two of the last three matches.

The Spanish giants are no longer the force they used to be and this could be a tough outing for them.

Bayern Munich are in exceptional form right now and they have won their last 5 matches across all competitions. The German outfit have scored 27 goals during that period as well.

Meanwhile, Barcelona are coming into this game on the back of a draw against Athletic Bilbao and a narrow win over Getafe.

They have a poor head-to-head record against Bayern Munich in recent seasons as well. The Germans have beaten them five times in the last six meetings and they have scored 20 goals against the Catalan giants during that period.

Lille vs Wolfsburg – Bet on Wolfsburg to win at 6/4

The Ligue 1 champions have made a poor start to the season and they have won just two of their last six competitive matches.

On the other hand, Wolfsburg are in red hot form right now and they are at the top of the Bundesliga having won all four league games.

The French outfit have lost seven of their last eight matches in the Champions League as well. Despite this being a home game, Lille are likely the struggle against a confident Wolfsburg team with momentum on their side.

Dynamo Kyiv are in excellent form heading into this contest and they have won six of their last seven matches across all competitions.

However, the home side have an injury crisis and they will be without multiple attacking players for this game period

Meanwhile, Benfica are in impressive form and they have considered just two goals in their last seven competitive matches.

The Portuguese outfit managed to beat Dynamo Kyiv twice in their last two meetings and they will look to take advantage of the home side’s injury problems and grind out a win.

Benfica are coming into this game on the back of a 5-0 win over Santa Clara and they will be confident of getting a good result.

The Swiss outfit are coming into this game on the back of four wins in their last five matches and they will be hoping to pull off an upset against the Premier League giants.

However, Manchester United are in impressive form and their performance against Newcastle United at the weekend shows that they will be the favourites heading into the game.

The likes of Cristiano Ronaldo, Bruno Fernandes and Paul Pogba are in red hot form and they should be able to guide their side to an important away win.

The Red Devils have won their last two matches against the Swiss outfit.

Despite being in impressive form, the home side have conceded in four of their last five matches and their defensive vulnerability could prove to be costly against the likes of Cristiano Ronaldo. 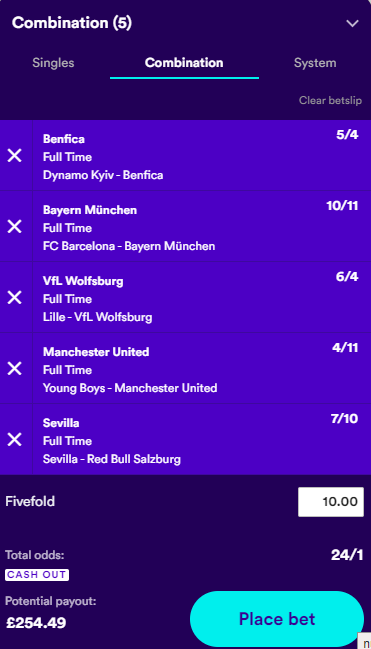