CT school district had teachers reflect on racial context of brushing their teeth, other ordinary activities

A Connecticut school district instructed teachers to track daily activities as mundane as brushing their teeth and analyze their purportedly racial context, Fox News has learned.

In the last school year, the exercise was part of an equity training in Manchester Public Schools (MPS), where teacher Jennifer Tafuto recently resigned over what she saw as an excessive focus on race. Tafuto provided Fox News with instructions for the “Daily Racial Reflection Timeline,” which MPS confirmed on Monday.

“First, list as many actions as possible of your regular daily routine starting with immediately after you wake up until you return to bed at the end of your day,” the instructions read. “Second, after completing your timeline, reflect on how race plays a role in what you have listed; discussing this with others can help.” 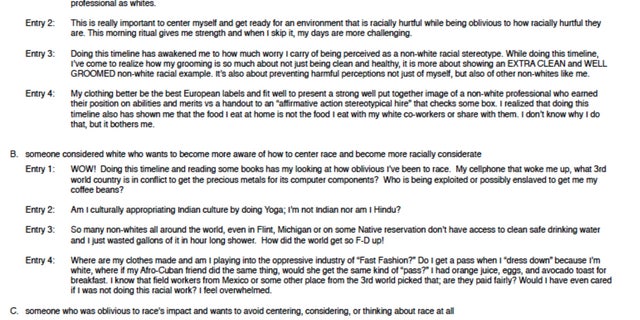 The four examples listed were things like “wake up and get coffee,” “brush teeth and take a shower,” and “[g]et dressed, eat breakfast.”

The instructions also provided examples of racial reflections for White and non-White individuals. They suggested a non-White person might say the following about practicing yoga and meditating in the morning.

“This is really important to center myself and get ready for an environment that is racially hurtful while being oblivious to how racially hurtful they are. This morning ritual gives me strength and when I skip it, my days are more challenging.”

For brushing teeth and taking a shower, they might say: “Doing this timeline has awakened me to how much worry I carry of being a non-white racial stereotype. While doing this timeline, I’ve come to realize how my grooming is so much about not just being clean and healthy, it is more about showing an EXTRA CLEAN and WELL GROOMED non-white racial example. It’s also about preventing harmful perceptions not just of myself, but also of other non-whites like me.”

By contrast, the instructions suggested a White person might worry about culturally appropriating “Indian culture” during yoga. They’re also provided the following example for teeth brushing and showering: “So many non-whites all around the world, even in Flint, Michigan or on some Native reservation don’t have access to clean safe drinking water, and I just wasted gallons of it in hour long shower. How did the world get so F-D up!”

James Lindsay, a longstanding opponent of critical race theory, told Fox News on Monday that the assignment seemed like compelled speech and a way to engender paranoia.

“”A ‘critical consciousness’ is hardly distinguishable from ideologically induced paranoia, and this exercise looks perfectly tailored to groom teachers into that.”

Lindsey currently hosts the podcast “New Discourses” and authored the book “Cynical Theories,” in which he explores the foundations and features of various aspects of critical theory.

“The purpose of this exercise … is to make everything in the teachers’ lives be about awakening a (critical) racial consciousness,” he told Fox News. “The objective would be to program the teachers to turn around and teach their students to think this way too. This should get people fired.”

So-called “equity” trainings have emerged in states across the country and have generally been defended as ways to foster inclusion or inhibit systemic biases against minorities. The timeline instructions tout the exercise as a way to “enhance your journey in becoming more racially considerate, as well as more fluent in centering race.”