Customers in Laplace, La., learn that a station has ran out of gas after waiting in line for more than an hour on August 30. Hurricane Ida made landfall southwest of New Orleans on August 29, as a category 4 storm. 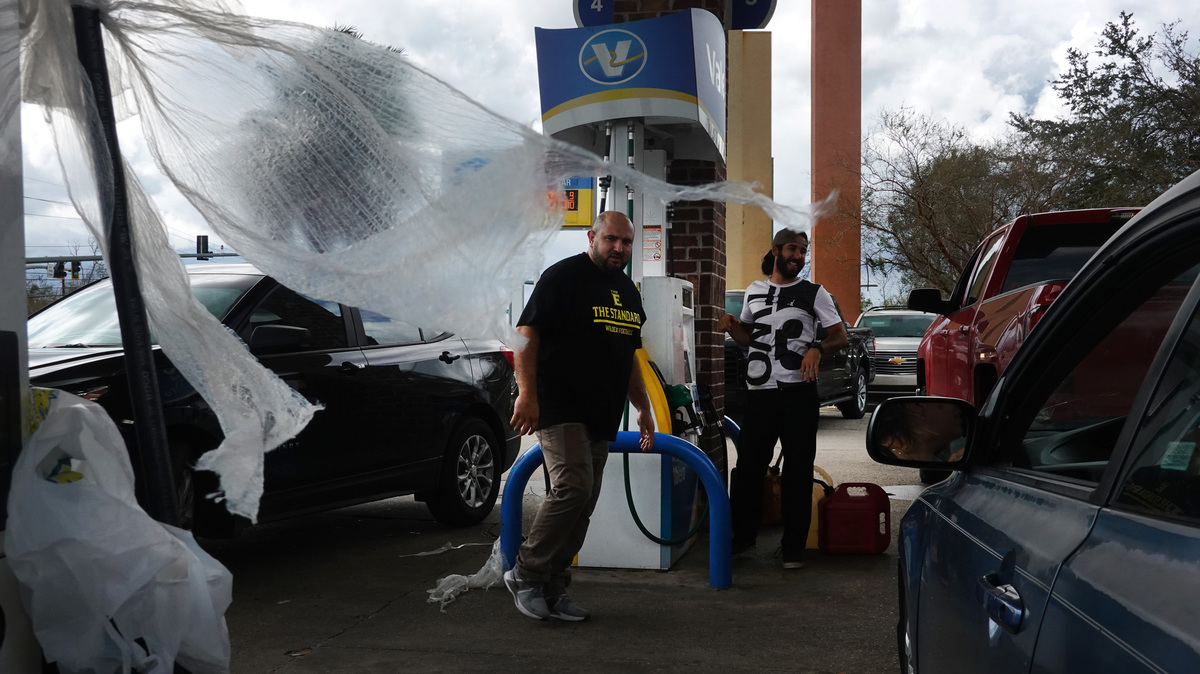 Customers in Laplace, La., learn that a station has ran out of gas after waiting in line for more than an hour on August 30. Hurricane Ida made landfall southwest of New Orleans on August 29, as a category 4 storm.

Oil companies are still assessing the damage at the oil rigs, platforms and refineries that were struck by Hurricane Ida.

But so far, signs point toward a limited impact on gasoline availability and prices. AAA has warned of price volatility, and several analysts expect temporary price increases of several cents, but experts are not expecting a dramatic or prolonged disruption to the market.

“This is not Katrina,” says Richard Joswick, head of oil analytics at S&P Global Platts. After Hurricane Katrina made landfall — exactly 16 years earlier — gas prices immediately shot up by 45 cents, and remained elevated for two months.

More than a million homes were left without power after Hurricane Ida made landfall Sunday night as a powerful Category 4 storm. The storm strengthened rapidly, a phenomenon that is increasingly common for tropical storms as a result of global warming.

As Hurricane Ida approached, oil companies rushed to evacuate personnel and shut down operations in the Gulf of Mexico, as is standard practice for an approaching major storm.

On Sunday, the Bureau of Safety and Environmental Enforcement reported that 95.65% of oil production in the Gulf of Mexico had been shut in, or temporarily closed down, as well as 93.75% of natural gas production.

Those are eye-popping percentages. But the key question for oil markets is whether any of the infrastructure was damaged. If not, Gulf producers could restart drilling and pumping in a matter of days; if equipment was broken by the storm, however, they could remain offline much longer.

Companies are currently in the process of checking for damage. ExxonMobil reports that its Hoover platform was undamaged, and is in the process of resuming normal operations. Shell has confirmed that three platforms that were in the storm’s path are “all intact and on location,” although they don’t have an estimate for when production will resume. Other operators, including BP and Equinor, say it is too soon to provide an update.

The energy data company Enverus says, in general, “early reports do not suggest that there has been severe long-lasting damage to oil infrastructure.” U.S. crude prices dipped slightly on Tuesday, suggesting markets are not worried about a lack of supply.

In addition to the offshore platforms in the Gulf of Mexico, a number of refineries along Louisiana’s Gulf Coast were affected by the storm. The Department of Energy reports that at least nine refineries have partially or fully cut production, with about 13% of U.S. refining capacity affected.

The storm’s most devastating winds passed just east of major refineries, but flooding damage remains a concern. And direct storm damage is not the only risk. Refineries also require electricity — and Hurricane Ida knocked out power for a large swath of Louisiana and Mississippi, with more than a million customers in the dark.

Damage assessments are still underway, and even if refineries make it through the storm unscathed, it’s not clear how long it will take to restore power to all the facilities. Some analysts are forecasting that it may take weeks, which could be a significant disruption to regional gasoline production.

The Environmental Protection Agency has issued a waiver for Louisiana and Mississippi, allowing winter gasoline to be sold in the area to address concerns about fuel supply. (Normally, the EPA requires the use of less-volatile, slightly more expensive fuel in the summer, because otherwise hot weather would create more dangerous fumes from gas.)

Impact on prices expected to be modest; U.S. is now less reliant on oil from the Gulf

Despite the substantial disruption to oil production and refining, most analysts anticipate a relatively limited impact to the market as a whole.

That’s not the same as no impact: Gasoline prices have already risen by several cents a gallon, and storm-influenced price fluctuations could continue for a few weeks. And gas prices were high this summer to begin with. But it’s a far cry from the intense, prolonged disruption that Hurricane Katrina memorably caused.

There are a few reasons for that. U.S. oil markets have changed dramatically over the last 16 years. The U.S. is less reliant on crude production in the Gulf of Mexico than it used to be, thanks to the rise of shale oil produced in Texas and New Mexico. The U.S. also exports more refined fuel products out of the Gulf now, and in a pinch, can redirect those exports to meet domestic needs.

Joswick, with S&P Global Platts, also says that the lengthy outages after Katrina had an impact on companies. “The refiners learned their lesson,” he says. “They hardened their facilities. They raised critical equipment up off the ground so it wouldn’t flood, for example.”

He notes, however, that if a second storm strikes the area while production is still recovering, the damage could be far worse.

Climate change — caused by greenhouse gas emissions, a large portion of which come from burning petroleum products — is causing more damaging storms in the Gulf of Mexico. As the oil industry faces growing scrutiny for its contributions to climate change, producers are also having to grapple with the ongoing consequences.