MINNEAPOLIS (WCCO) — Saturday is shaping up to be an active weather day, with rain and severe weather likely across the state. Here is a look at the currently active weather alerts in Minnesota right now. 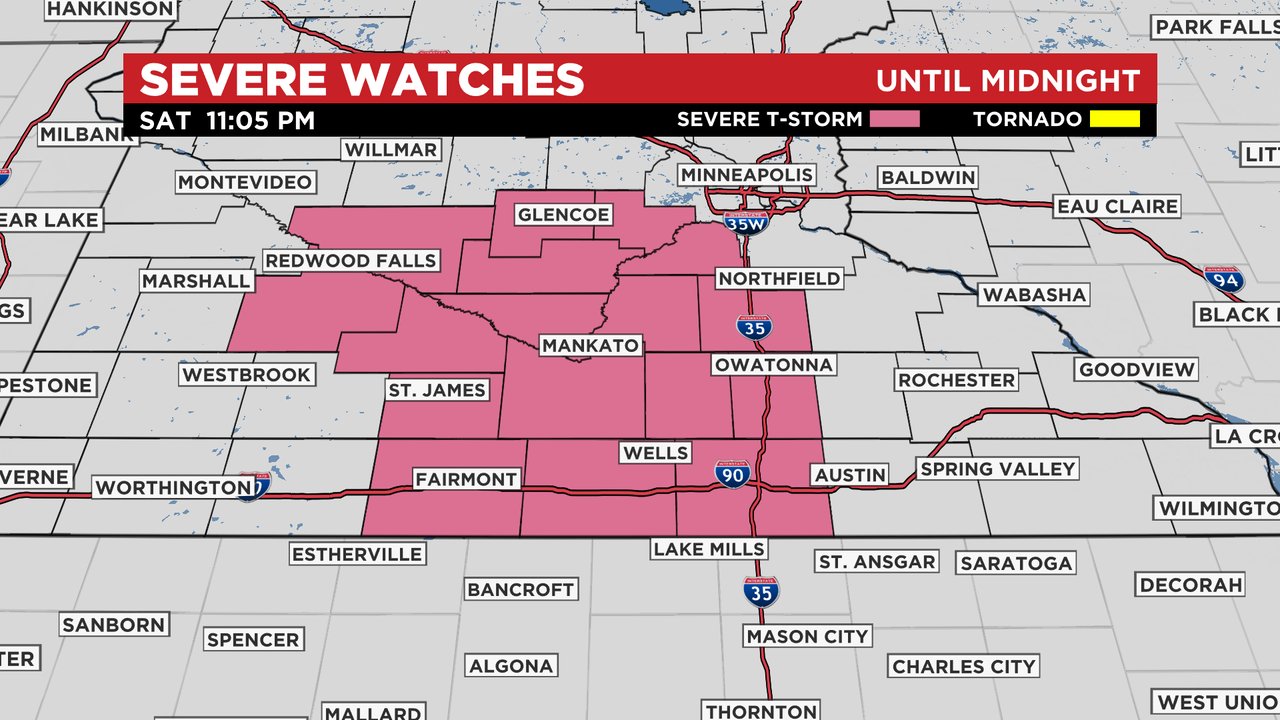 UPDATE (10:20 p.m.) —  A flash flood warning was issued for Nobles, Murray, Lyon, Osceola, Cottonwood, and Jackson counties until 2:00 a.m. and another tornado warning was issued, this time for Brown county until 10:45 p.m.

UPDATE (8 p.m.) — A number of other counties were under severe thunderstorm warnings Saturday evening, and others under flash flood warnings as storms continued to roll over a patch of Minnesota that’s seen very little rain for much of the preceding summer.

First flash flood warning of the night has been issued for area outlined in blue. 1.5-3″ of rain has fallen and another 1-3″ of rain is possible. Flash flooding is possible. Turn around don’t drown. @wcco pic.twitter.com/hDByg3kjJk

A tornado watch will likely be issued for area outlined in red shortly. @wcco pic.twitter.com/8dCMFjQ5aM

WCCO collected photos from a Westbrook resident who showed the extent of the damage on their property after a storm rolled through Saturday evening.

Baseball sized hail has been reported in areas such as Appleton and Melrose. More storms are expected to move through southern Minnesota later this evening.

Things are quiet for now but we are not out of the woods yet. Please stay weather aware as we go throughout tonight. @wcco pic.twitter.com/HVFitMq9hn

UPDATE (2:30 p.m.) – A tornado watch was cancelled which had been issued for areas of eastern Minnesota.

UPDATE (12:55 p.m.) – Anoka, Wright, and Hennepin County could soon be seeing thunderstorms roll through the area.

A storm in central Minnesota – near Brainerd and Alexandria – produced hail and wind and worked over the atmosphere enough to lower the overall threat for a second round of severe weather, according to Meteorologist Mike Augustyniak. However, Augustyniak says that storms developing west of the metro area and in the Minnesota River Valley are in a much richer environment. Those storms could possibly stay less severe, meaning they will not use up the abundant thunderstorm fuel, but a front later Saturday evening will have the thunderstorm fuel to work with, continuing the severe weather threat until at least 10 p.m.

UPDATE (12:30 p.m.) – The thunderstorm watch has expired for western Minnesota, and there have been tornado warnings issued for Benton, and Mille Lacs counties until 12:45 p.m.

Meteorologist Mike Augustyniak reports that considerable damage is likely for a severe and possibly tornadic thunderstorm moving through Milaca, on its way to Princeton. The storm is likely producing baseball-sized hail and 75 mph winds. A line of non-severe thunderstorms will move through the north and west metro within the next hour. These storms are likely to intensify with time, according to Augustyniak.

⚠️ A Tornado Watch is in now effect until 4p for the counties in yellow. A Severe T-Storm Watch remains in effect until 12p to the west. NOW is the time to know where you’ll go if severe weather threatens your area. Visit https://t.co/gjAWahouVl for more pic.twitter.com/IvX57lZhEL

The morning started out sunny in the Twin Cities, with temperatures in the 70s. Areas south of the metro also woke up to the sun.

However, thunderstorms are rolling through the western part of the state. A severe thunderstorm watch is in effect for western Minnesota until noon, and Ortonville saw marble to ping pong-sized hail around 8 a.m. on Saturday.

Scattered thunderstorms will become more widespread later in the afternoon and into the evening. In the Twin Cities, the wet weather could start around 2 p.m., though significant rain could start falling around 5 p.m. and 6 p.m.

Almost the entirety of the state is under a threat for severe weather on Saturday, with central Minnesota under an “enhanced” risk. The threat is greatest for damaging wind gusts, which could be stronger than hurricane force, large hail, and possibly tornadoes.

An “enhanced” risk for severe weather across large parts of Minnesota on Saturday (Credit: CBS)

Even though Minnesota is in the middle of a historic drought, there is also a chance for flooding. Over an inch and a half of rain is expected in central Minnesota through 7 a.m. on Sunday. With all the rain that has fallen in the last week, only one-to-two inches of rain needs to fall in a six-hour time span to cause flash flooding.

Sunday will be less humid and dry. Temperatures next week will be closer to average, in the 70s.